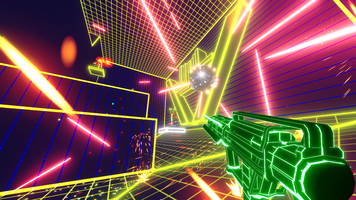 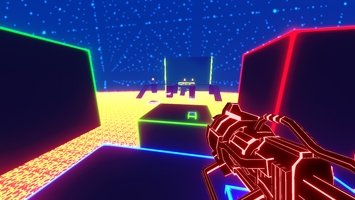 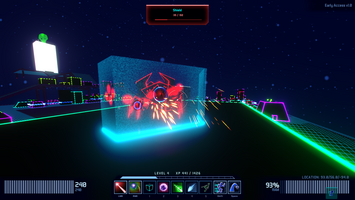 I wanted to wait until we got the volcano done, but I figured y'all would want all these other fixes I've been working on since February. So without further delay,

So above there - you can see the new Mor.tar.gz enemy, who denies a big area for several seconds. They're pretty easy to take down at close range, but they can ruin your day if you're not paying attention.  The Popup also has a whole new look, and the Aimbot is actually animated now. Additionally, all enemies now can be staggered by doing enough damage to them, which allows for some great close-ranged gameplay.

One of my goals is to encourage people to play multiple characters with different builds. To that end, I've created a cross-character Hacker Cache, placed near shops throughout the world, which allow you to easily transfer items between any of your characters. You can also upgrade their storage size with bitcreds. In your inventory, you can now mark items as Favorite to exempt them from the "Sell All" button.

Choice Cubes are a new mechanic, which offer a choice of three items when opened. They drop from Arena servers like Portcullis, and can also be purchased from shops. They can contain unique items! A full FIVE new perks, with all sorts of new combinations! Also - Aimhax has been changed to affect machineguns instead of snipers, to reward accurate sniping.  Sniper rifles can still drop with Homing on them, however!

You should see a *huge* increase in framerate in this patch. I've updated through two major versions of Unity, added Occlusion Culling, and now de/respawn enemies/powerups with distance.

Please let me know if you like all this stuff. We've been working really hard on it, and we've got some Really Neat Stuff coming very soon (Volcano/Arcade/etc!) Anyway, go have fun!